Parts of this longer hymn are used in the Mozarabic Office of the Dead. The starred strophes are found in the popular hymn “Jam maesta quiesce”.

In the Martyrologium Romanum, each day has a heading with the Roman date, and a table that gives the status of the lunar cycle. These are the first things read each day in the Martyrology.

Each month contains three reference dates: the Kalends, Nones, and Ides. While the Kalends is always the first day of the month; for eight months, Nones and Ides are on the fifth and thirteenth, but in March, May, July, and October,  they fall two days later on the seventh and fifteenth.

The day before each reference date is the pridie, so the 6th of July is called: “Pridie Nonas Iulii.”

The lunar calendar and the phases of the moon are key components in determining the date of Easter, which is set as the Sunday following the first full moon of Spring. On average, there is a new moon (when the moon goes dark) every 29.53 days. In whole numbers, this is figured as each lunar cycle being either 29 or 30 days, depending on the month of the year.

So, on July 4th 2018, the current Martyrology letter is n, which corresponds to an age of 21 (out of 30), which is said: “Luna vigesima prima.” Which is a moon waning in its last or third quarter phase (about half bright and half dim).

(A suffrage is a short intercessory prayer said to both honor the subject and beg for their heavenly aid. Often said as personal devotions—several one after another. In previous times a number were mandated at the conclusion of Lauds and Vespers, and it matches the traditional form of commemoration of feasts in the Divine Office (Antiphon, Versicle and Prayer).) 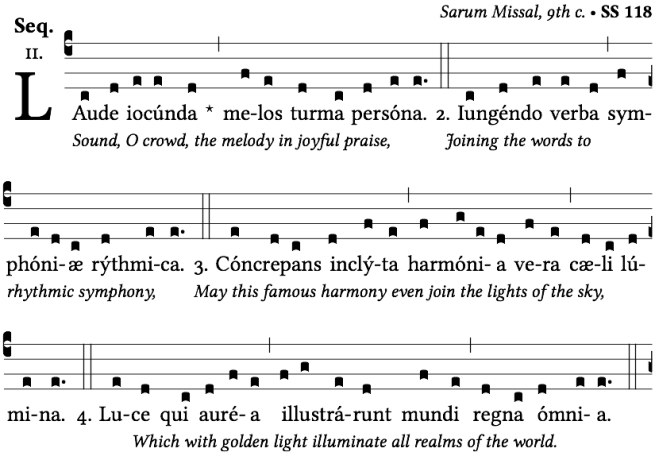 Sequence for the Feast of Saints Peter & Paul, June 29

Sound, O crowd, the melody in joyful praise,
Joining the words to rhythmic symphony,
May this famous harmony even join the lights of the sky,
Which with golden light illuminate all realms of the world.

Their strong trophies are already blossoming in the kingdom of heaven,
Whose merits dispel the crimes on this shining day.

For one triumphed through the execution on the cross, the other through the sword in the neck, both laurels are shining.
And above the highest stars, famous through their victory, they are prelates in the heavenly court.
From thence, thou, O blessed Peter, who openest [and] closest the great gates of heaven with thy word,
Mildly receive the faithful prayers, dissolving all bonds of sin.

Paul, bring us holy doctrine that illuminateth the hearts of the people,
And carry our minds beyond the stars, as perfectly as God may give.
From thence may come the music of the virtues, fair, with strings and singing,
In that shall be composed the harmony, and that, which is really the original perfect fourth.

Consisting of Virtue and Justice
Of Temperance and Prudence,

With them more than fittingly adorned, let the crowds sing enharmonic canticles to Christ.
May they be joined to our choir, may they give these lights, whom we give more than lyrical songs,
Now everything that is redeemed shall give a solemn Amen.

Melody and text as in the Gregorian Institute of Canada’s Sarum Rite Sequentiarium edited by William Renwick and Caroleen Molenaar.
Translation from the Saint John Fisher Missale.